Audrey is the co-founder of Christian Thinkers Society, my prayer partner, she earned the Master of Divinity while pregnant with Lily Faith, she is mom-extraordinaire, my best friend, and Jesus Christ remains the center of our marriage! Here’s a photo we took yesterday after meeting with a wonderful pastor here in Houston.

– Thank you for praying for our event with Rice University Ratio Christi which was broadcast LIVE in the Lecture Hall of the Rice University Geological Building across from the Student Center – details below! Upcoming CTS events with Colson Fellows and LIVE Apologetics Outreach Events in Montana and New Jersey! Thank you for your prayers. 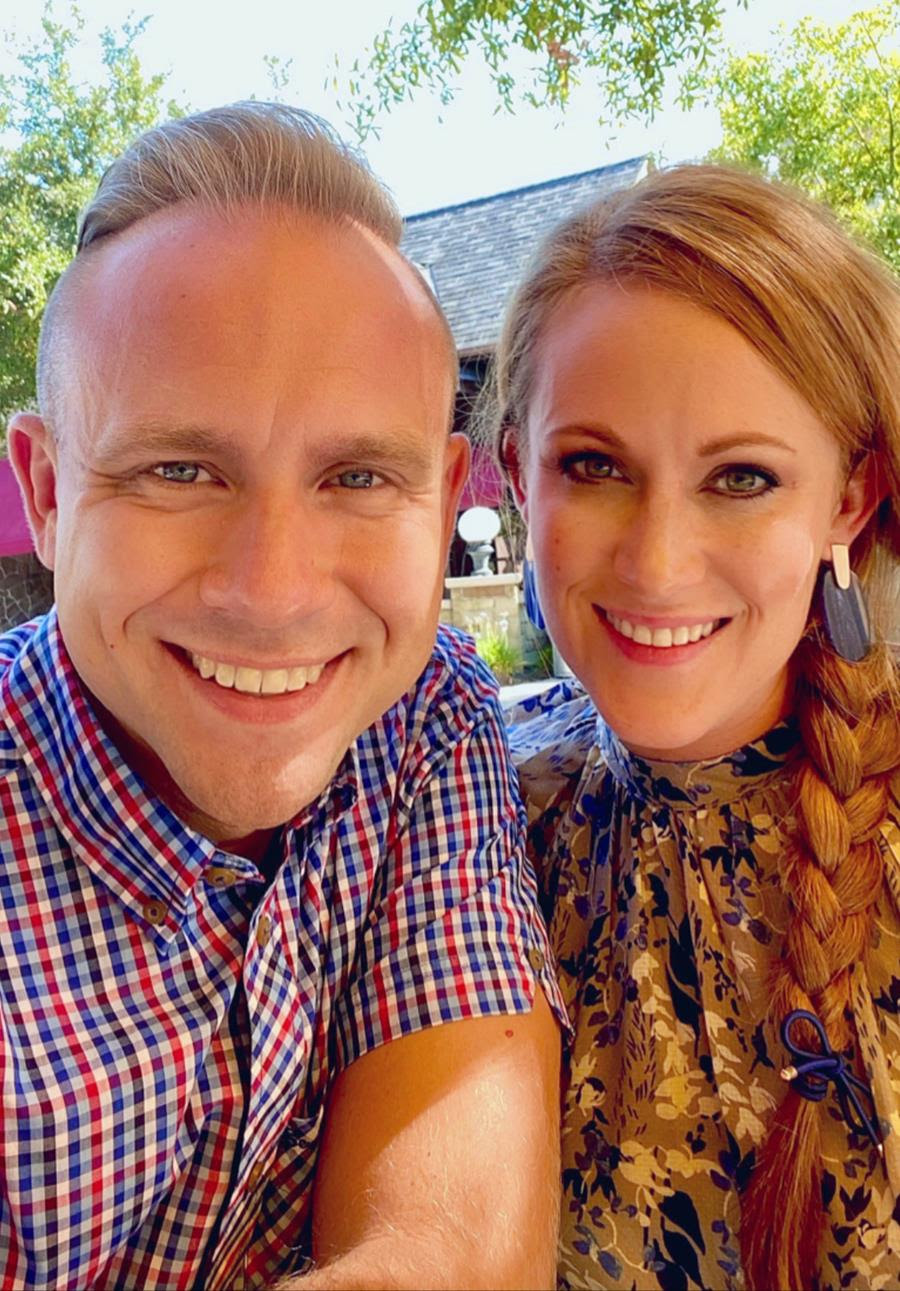 Steve Jobs was one of the most iconic people of our time. His innovations have shaped and connected the world. No wonder he appeared on the cover of Time eight times between 1982 and 2011. Earlier in life Steve Jobs had an unanswered question that, tragically, caused him to walk away from his Christian faith. Walter Isaacson wrote these chilling words about Jobs’s loss of faith at 13 years of age:

In July 1968 Life magazine published a shocking cover showing a pair of starving children in Biafra. Jobs took it to Sunday school and confronted the church’s pastor. “If I raise my finger, will God know which one I’m going to raise even before I do it?” The pastor answered, “Yes, God knows everything.” Jobs then pulled out the Lifecover and asked, “Well, does God know about this and what’s going to happen to those children?” “Steve, I know you don’t understand, but yes, God knows about that.” Jobs announced that he didn’t want to have anything to do with worshipping such a God, and he never went back to church.*

Perhaps the most prevalent unanswered question people have today is the question of tragedy, pain, and suffering. As Christian thinkers, we must be prepared to answer these questions for the young Steve Jobses of the world.

Here are four principles that affirm God’s ultimate power over and purpose for evil and suffering in our world.

1. GOD ALLOWS AND IS IN CONTROL OF ALL MY CHALLENGES.

In Genesis 39 God allowed Joseph to be wrongfully accused by Potiphar’s wife and then thrown into prison, where he waited 13 years before he finally had an audience with Pharaoh. Was Joseph right with God? Was he living obediently? Yes. And yet God allowed this problem to occur because He had an ultimate purpose in mind. After his trial was over, Joseph could say to his brothers, “You meant evil against me, but God meant it for good” (Gen. 50:20).
How do you see this principle in action in your life? That challenge in your life that you think is trying to destroy you—God is using it for good. God wants to get you to a place in your Christian life where you are utterly dependent on Him. Those experiences in Joseph’s life that were meant for evil were actually
a disguised blessing. God had a much greater purpose not only in Joseph’s life but also for all of Israel. Through Joseph’s rise to power and wise leadership, the messianic line of Abraham was saved from famine.

2. I MUST TAKE RESPONSIBILITY FOR WHAT I CAN DO AND ALLOW GOD TO DO THE SUPERNATURAL.

Often the issue is not so much a struggle with evil as the need for a personal decision: Will I trust the Lord in hard times? Shadrach, Meshach, and Abednego would rather have died trusting God than live outside His plan. They had no guarantees that God would physically protect them from the fiery furnace, and yet they uttered three of the most courageous words in the Bible—“But if not”:

If this be so, our God whom we serve is able to deliver us from the burning fiery furnace, and he will deliver us out of your hand, O king. But if not, be it known to you, O king, that we will not serve your gods or worship the golden image that you have set up. DANIEL 3:17-18, ESV

3. SUFFERING CAN CONFIRM MY FAITH.

When we suffer, we realize how insignificant our lives are apart from living them in the will of God. We see that the real value of life is not in the temporal realm but in eternal matters. Abraham proved his faith by his willingness to sacrifice his son of promise, Isaac (see Gen. 22). Like Abraham, we must make the decision to persevere in our faith. Let us also never forget that just as God provided the ram in Abraham’s story, God is bringing our solution in His perfect timing.

4. SOMEDAY EVERYTHING WILL BECOME CLEAR, AND GOD’S ULTIMATE PURPOSE WILL BE ACCOMPLISHED.

Biblical heroes like Abraham, Joseph, Job, and others did not have clarity about their trials in the midst of them. It was only later that they realized what God was doing during the crisis.

Even Jesus suffered depression and such sorrow prior to His crucifixion that He nearly died (see Matt. 26:38). So intense was His pain that He asked His Father, “If it is possible, let this cup pass from Me” (Matt 26:39, NASB). Only a few hours later He would sense such unimaginable abandonment from His Father that He would cry out, “My God, my God, why have you forsaken me?” (Matt. 27:46, ESV).

The author of Hebrews recorded these profound thoughts for us:

We do not have a high priest who is unable to empathize with our weaknesses, but we have one who has been tempted in every way, just as we are—yet he did not sin. HEBREWS 4:15, NIV

Jesus persevered through His suffering in obedience to His Father. Through His experience, we can be confident that He knows what we are going through when we suffer and that God will bring about His good purposes for our lives as He brought victory over evil through Jesus.

Message Body:
Dr. Johnston,
I was the person who asked last night, during the Ratio Christi meeting, if you had a study guide for your book. I would love it if you would share your slides and would promise not to share them outside of a small group situation. However, more importantly than that,  I just want to say how grateful I am that you wrote this book. Working with youth for many years, I have realized how important it is to make them understand the significance and beauty of the Christian movement. If you ever decide to do a study guide, I’ll push it like a drug dealer. 🙂 But, honestly, I’m going to push this book, regardless.
I thank you so much for your work. God bless you and your super cute family!
Carrie 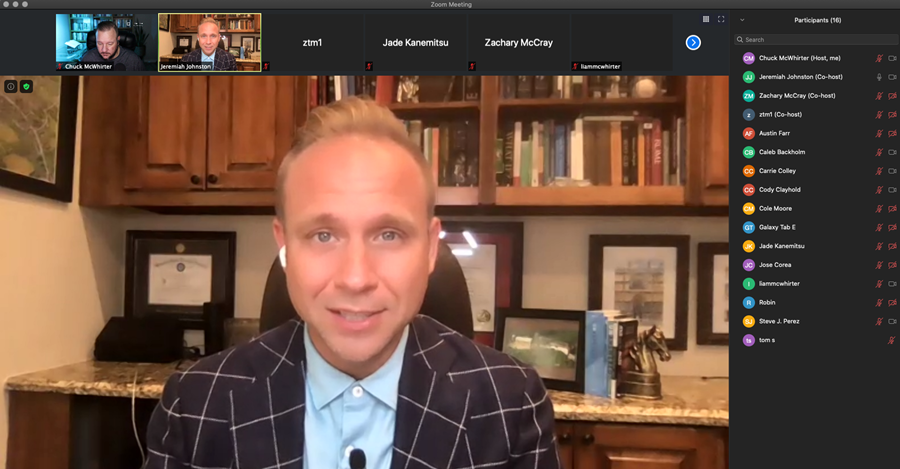 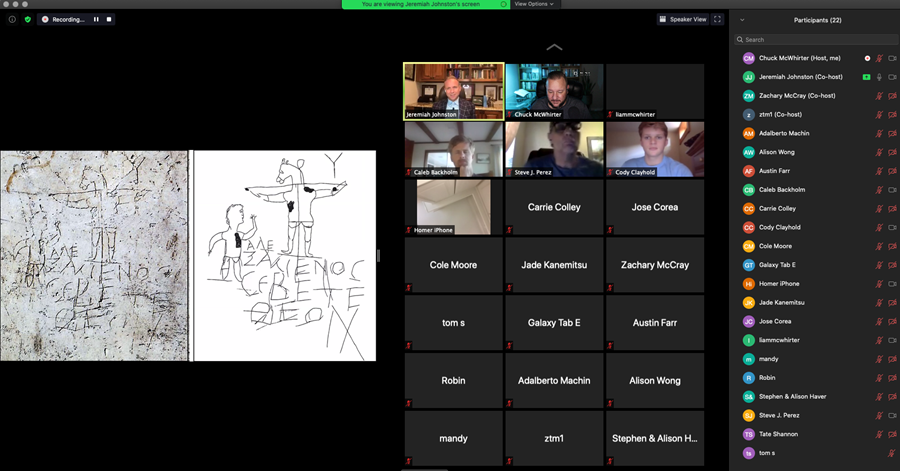 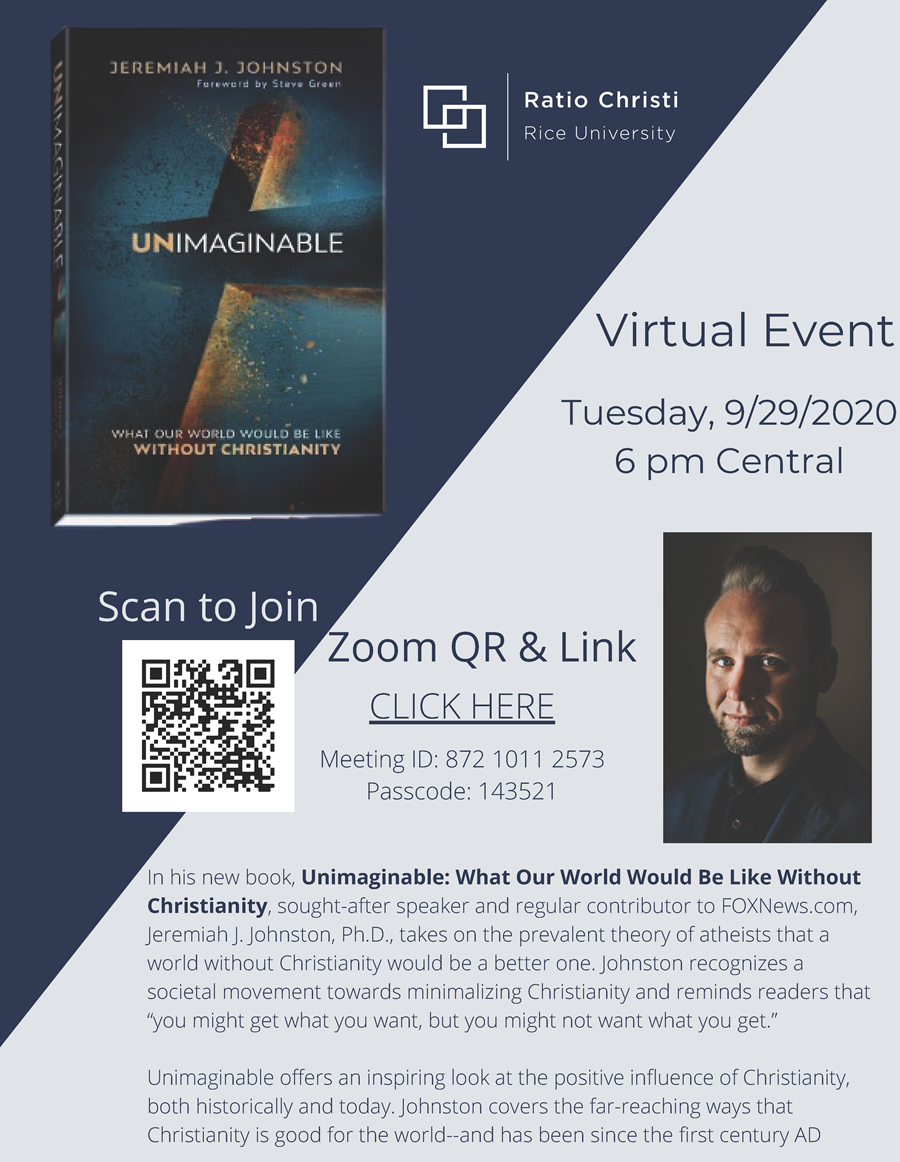 26 days until the election … did you know 1 in 4 Christians are not registered to vote? I am grateful for “My Faith Votes”

You can access all the free non-partisan materials for your church to participate in National Voter Registration Sunday with a virtual or in-person voter drive here.

One of the most requested My Faith Votes resources every election year is their Party Platform Guide. Please check it out and vote your faith!